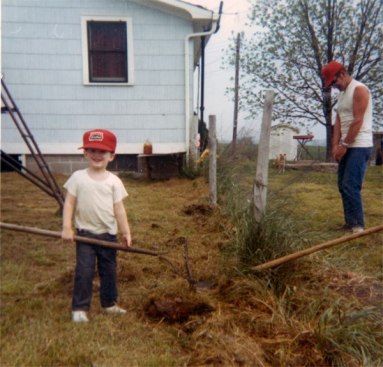 Shortly before he passed away, my father came to see me play the part of Schroeder in a community theatre production of You’re a Good Man, Charlie Brown.

It’s a night (and a lesson) I’ll never forget.

My Father Laughed at Me (and I loved it)

I can still see him sitting there beside my mother in the front row. His skin was pale. His frame was lean. He looked so tired and weak. Just months before, he’d been diagnosed with Leukemia, a thing that seemed intent on doing what it came to do in a quick and merciless manner.

But what I remember most about that night was the sound of his laughter. From the stage and all through the performance, I could hear him chuckling and giggling in a way I hadn’t heard him do in quite some time. It was the laugh I’d always loved, and on that night, it was the sweetest sound I’d ever heard.

It was, however, a fluke that I was even in the play. I hadn’t pursued the role, or any other role, or much of anything else I cared about since high school. Long ago, I’d put such things away in order to become practical.

Who I Used to Be

Yes, when I was a small boy, I made my first trip to a movie theatre, saw Tom Thumb, and insisted on reenacting it for a string of hapless babysitters.

Yes, after receiving a cassette recorder for my eighth Christmas, I used it to produce a series of little radio plays I wrote.

Yes, when I was in the fifth grade, I saw my first live play, went home, and immediately wrote my own, one my classmates and I performed for our Home and School Christmas program.

Yes, I went on to write dozens of sketches, stories, poems, and plays; become a member of my high school drama club; and even win a few awards.

But that was all just grade school and high school stuff. Life’s a ball and then you grow up. You get a degree. You get a job. You get real.

Who I Tried to Become

You see, I was going to be the first in my family to attend college and I took that pretty seriously. I wanted to make everyone proud. Especially my father.

I thought I couldn’t afford to waste my time on things I loved. They seemed so silly, trivial, and impractical. Sure, the university offered degrees in things like English and Theatre, but come on. I had to earn a living.

No one I knew made their living writing stories or poems or plays, and the town in which I was raised contained no actors or artists, at least not any that I knew of or that anyone paid attention to. So I took stock of my more practical skills, like math. I’d heard somewhere (Okay, more like everywhere) that engineers made good money and were in high demand, and I headed in that direction.

I boxed up all the silly stuff, writing and acting and goofing about, and threw it in an attic somewhere. I shut the door. I moved on.

Unhappy with engineering, I tried computer science, another respectable and profitable career path. Same results. I tried accounting, did really well in my classes, and even received an additional scholarship. More sadness. Every day, as I walked across campus, I’d glance sideways at the English building, but I’d already completed the required writing and literature courses, courses I loved but considered a mere distraction.

In those courses and all the others in which I was given writing assignments, I’d hear the same thing. “You’re a very good writer, you know,” my professors would say, and they’d often point to my work as an example for my classmates.

But I wouldn’t listen. I was out to make my father proud, and to me that had nothing to do with the things I loved.

Moving On and Further Downward

I eventually settled on a marketing major in order to settle on something, anything, get the hell out of there, and get a job. Maybe then, I thought, I could find a way to prove I had something on the ball. But the job world wasn’t much different. I worked hard, received a lot of praise and a few awards and promotions, but never felt at home. The depression only grew larger and darker, and just as I’d done in college, I drifted from one thing to another while feeling lost.

The Me My Family Never Knew

Somehow, in the midst of all that, I got married and had kids. I had a great family, but I still couldn’t shake the blues. I knew I was not the person I once was, and it struck me that the people in my home, the ones I loved the most, had no idea that such a person had ever even existed.

In fact, when a friend of mine paid a visit and showed some old video tapes of me acting and performing in skits and plays and amateur movies my friends and I had made, my wife at the time looked at me as if she had no idea who she married.
“I’ve never seen that side of you,” she said, “I love it.”

But I was still busy struggling and straining to be practical and failing miserably at it. The only practical thing I was succeeding at was feeling practically dead inside and exhausting those who cared about me.

Saying Yes for a Change

Then came my father’s Leukemia. My attempts to make him proud, in the way I thought I should, weren’t really panning out, and the time to do so was slipping away. Life had not gone as planned.

I think that’s why I agreed to do the play. It reminded me of better days, days when my friends and I had fun, and it had been a long, long time since I’d allowed myself to do anything that sounded like fun.

My friend Jennifer had called to see if I’d be interested. The theatre group was shy one actor.

There were reasons to say no. I was in my thirties and it had been fifteen years or more since I’d done any acting. I’d never been in a musical. Whatever singing voice I might have once had (I actually sang in a few weddings when I was younger) had been ground down by the cigarettes I smoked to escape my restlessness.

And it was community theatre, something many people regarded as the K-mart of the performing arts and the last bastion of ridiculous, wannabe actors. We would be a bunch of goofy people having a goofy time doing a goofy thing.

It was a blast. The people involved in the production were smart, warm, supportive, and fun. The practices were an escape from my troubles and depression. I felt alive. I felt happy. I felt a lot like the person I used to be.

We did three performances. Friends came, my wife and the kids came, and on a Saturday night, my parents came. They all laughed, but no one laughed as hard as my father did.

Oh, how he laughed, and I wasn’t the only one who noticed. Back stage, the others grinned and remarked how much he seemed to be enjoying himself.

Afterward, when it came time to go out and greet the audience, a few of the other cast members and I made our way to the front row. My dad was there, smiling like a big kid, working to rise from his seat. When he stood, he embraced me.
He shook his head, looked at us through watery eyes, and said, “I just want you to know you sure made an old man happy tonight. I haven’t laughed that hard in a very long time, and I really needed something to laugh about.”

My new friends and I had made an old man, my old man, happy, and we’d done it by doing something that made us happy.

What a Little Joy Can Do

I wondered how much happier I could have made him through the years if I had simply followed my heart and pursued the things I loved. I wondered how much joy I could bring to everyone I love, if I just did things that brought me joy too.

I don’t know if I always made my father proud, or if that even mattered. What I do know for certain, however, is that one night, a night when he and I both needed it most, I made him laugh, and that makes me proud.

In a few short months after that night, my father passed away. The last gift I ever gave to him, it turns out, was a gift I gave by simply using my own.

You have a gift like that, something you love, something you enjoy, something that lights you up inside. Those are the gifts you have to share because you have a need to share them, and because there’s someone out there who has a need to receive them. And that’s really the only thing this trip called life is all about.

4 thoughts on “The Last Gift I Gave My Father”